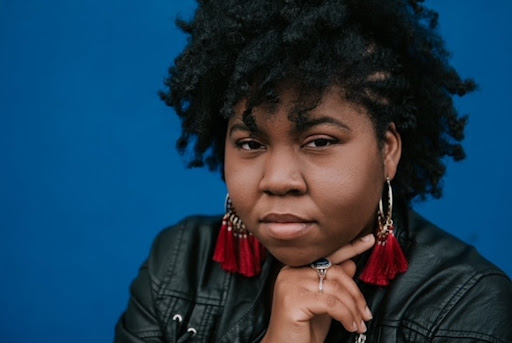 Ashley Jones has long made her presence felt in Birmingham’s creative scene. Her heartfelt poetry along with her work at the Alabama School of Fine Arts, Magic City Poetry Festival, and for various well-respected publications have introduced her as one of our city’s finest wordsmiths and most motivated activists. Her talent, which she’s been crafting since the age of 7, has already expanded beyond the city’s limits – however this year has seen her impact reach a level like never before. She was recently named the state of Alabama’s youngest Poet Laureate and just released her third book, Reparations Now!. It’s safe to say her words are now reaching an even broader audience, and leaving a bigger impact on those who hear them.

Ashley’s parents instilled a spirit of creativity into their children from an early age. “My family was all about education and artsyness,” Ashley recalls. She was reading by the age of three, and it wasn’t long before a second grade assignment requiring students to memorize and recite writing inspired Ashley’s love for poetry. She chose to read from a book titled “Honey, I Love” written by Eloise Greenfield. She recited the following lines from a poem named after Harriett Tubman that day:

“Harriett Tubman didn’t take no stuff, wasn’t scared of nothing neither. Didn’t come in this world to be no slave, and wasn’t gonna stay one either.”

When seven year old Ashley spoke those words aloud she felt cool, powerful, and fully realized in a way that she had never felt before. “It’s because it was a poem that I was reciting. It’s because it was a Black woman’s voice. And it’s because it was a powerful Black woman. All of those things converged to show me this can be how you communicate as well–you can use poetry. Since then I’ve been writing poetry.” Ashley recalls this moment in a piece called “Recitation” in her second published work, dark // thing.

Although Ashley began writing at a young age, it took years of hard work and purposeful building to become the poetry presence that she is today. She attended ASFA from 7th to 12th grade before going to UAB where she majored in English with a Creative Writing concentration. She edited two literary magazines during this time, Aura Literary Arts Review and Sanctuary. These moments allowed Ashley to learn more about the world of publishing, but it wasn’t until graduate school at Florida International University that she started sending her writings to larger journals. When she finished her thesis, Ashley submitted it to a book contest and “that’s how the ball got rolling.”

Her third book was just released September 7th, and Ashley’s excited to have people read something she worked so hard on. “I have been committed for a long time to using my art to change something. Change society. Change people’s views, or at least open them up towards empathy,” Ashley shares, and that certainly continues with Reparations Now! She says that while the title may seem political to some, the intention of the book is to show people what the term actually means. The root word for reparations is repair, and to repair is to heal. Ashley shows us what this healing could look like on both large and smaller scale issues that stem from the same source.

There are also writings on personal moments that require repair and healing.  “There are poems in the book that try to give healing from me to me. That’s also really important, and maybe that self worth is at the root of all types of reparations.” The cover art for Reparations Now! was made by Erin Leann Mitchel, a prominent artist who happened to attend the same high school as Ashley.

If releasing a third book wasn’t exciting enough, Ashley was recently named Alabama’s youngest and first Black Poet Laureate in the position’s 91 year history. She’s excited to represent a state that so many view as a monolith that doesn’t include her, and “to tell everybody else in the world and the US that there’s amazing things happening in Alabama and that the country really owes us a lot.” People that are still living in this state stood up and impacted the entire world as recently as the Civil Rights era, and Ashley believes part of her new job title is getting people from around the nation “to realize what we did and what we can still do.”

With these new accomplishments, Ashley’s days are busier than ever–but she still aims to use every available opportunity she can to cherish family and friends while uplifting the city. She expressed gratitude for the city’s writing community, her parents, teachers, writers, and inspirational city-changers like the great Voice Porter who “put a lot of work into establishing a vibrant arts culture here in Birmingham.” Ashley believes that we are “staring down an incredible moment to make Birmingham what we’ve always hoped it could be” and believes it will take “humility, graciousness, great empathy, and helping leaders understand what they need to do to serve the community.” With a thriving poetry scene and Alabama’s history-making Poet Laureate in our corner–we can’t help but feel good things are happening as well.