Birmingham Squadron Ready For Second Half Of Exciting First Season 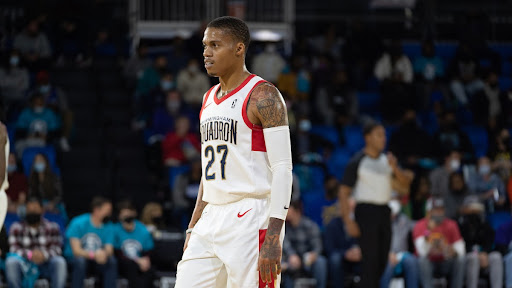 The Birmingham Squadron is a force to be reckoned with. The team is coming off an excellent first half to their inaugural season in the Magic City which concluded with a five-game win streak before the 2021 G-League Winter Showcase last weekend. The second half of the season is unique in that each team’s record essentially returns to 0-0, and they play 36 games to determine who makes the April playoffs.

I was able to speak to the Squadron’s General Manager of Business Operations, David Lane, after first being introduced to Joseph Hooven, the team’s Manager of PR and Broadcast. Both had clear excitement for this holy matrimony between the Magic City and NBA-caliber basketball.

“Birmingham always stood out,” shares David on the research process that came after Gayle Benson, owner of the New Orleans Pelicans and Saints, determined that she wanted to purchase a G-League team that would provide rising players a direct path to the NBA while helping enhance their game. One of the biggest factors in choosing Birmingham was the city’s constant ranking at the very top of NBA television and radio tune-in rankings. “We knew there was a strong want for a basketball team in Alabama, and we were happy everything worked out here in Birmingham.”

One of the ways things worked out for this partnership is the recently completed renovation of the Legacy Arena at The BJCC. “It’s one of the nicest in the G-League, if not the nicest, and it also rivals NBA facilities as well. We are thrilled with the city, thrilled with the arena, and excited for the future,” shares David. The upgrade features a brand new court, new seating, new suites, and a back-of-house layout that is designed for the players.

The G-League has been seeing some impressive growth as well, as it’s become many team’s favorite way to strengthen their rosters. There are now 29 teams in the league, with 28 of them being NBA-affiliated. Mexico City is the lone independent team. “We’re thrilled to be a part of it,” David comments. The team spent two years in Erie, Pennsylvania before making the move to Birmingham, and having a city and venue to call home has amplified the team’s enthusiasm.

The Squadron is not only dominating on the court, but a few of the team’s shining stars also have Alabama ties. Jared Harper, who played for the Auburn Tigers, and former University of Alabama star John Petty Jr. are two great examples–and have quickly become favorites among the team’s fans. Joe Young is another player who’s been electrifying the Legacy Arena. The Squadron is coached by Ryan Pannone, who has years of experience with college and overseas, and is assisted by a top-quality staff that includes Associate Head Coach T.J. Saint.

The team wants the fan experience during halftime and in-between time outs to be just as thrilling as watching the team on the court. David says that the team wants to throw “24 parties” in the city, not just basketball games. Shenanigans at previous games included dance-offs with Santa Claus himself, and the team is only planning more fun happenings as they get comfortable in their new home arena. January 8th will feature a fan fest block party, January 16 features the Squadron playing on NBA television as part of Martin Luther King, Jr. Day, and January 23 is Faith and Family Night. The team is also introducing new family fun packs that include tickets, hot dogs, soda, and chips. Fans can now get into the game for $5 with the new Upper Club pricing as well. These are just a few of the developments and promotions the team is excited to share over the upcoming weeks as well.

“We’re excited and empowered by the response we’ve received by fans over the first six games,” shares David, “What we love is that fans fell in love with the team. They stay until the end of the game, they’re cheering. They’re in it and we want to see more of that as we’re moving forward.”

We can’t wait to see what 2022 and beyond hold for this team and this city.