Akil Pratt and Phrasure create something special with their new collaborative album. 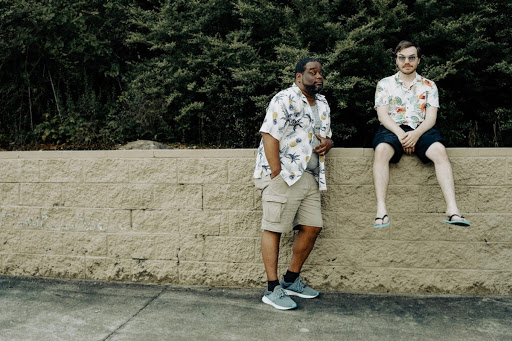 Birmingham musicians Akil Pratt and Phrasure recently released one of the most heralded albums in the city this year with “Dad Raps”. This success would have you think the two have been long-time collaborators, but the first time they met in person was actually in the studio to record the album. The natural connection and mutual understanding that they can use their talents, shared interests, and love of a city to create something special clearly put those first introduction jitters away.

The two first spoke after Phrasure, known offstage as one of Birmingham’s biggest music fans Jakob Frazier, interviewed Akil in 2020 about his Double LP “Depressed Genius”. Jakob already had a deep respect for Akil’s production after hearing his work on G.I. Magus’ album “Verses the World”. The addition of this new album made Akil a can’t-miss musician to highlight in the Magic City.

A short time later, Akil put out a Facebook post asking if anyone wanted to collaborate on an album and Phrasure immediately jumped in his inbox, saying “I don’t know if you have a line, but I’m in line now” and things took off from there. Akil did all of the production, mixing, and mastering, along with most of the choruses and singing slots (the album also features the talented Deontaé on a hook and guitar solo on “Clean Up”. Phrasure keeps it humble by saying “All I did was write some words”, but he also created the synth lines for “Average Rapper” and “Defy Gravity”–in addition to coming up with the album concept.

The title “Dad Raps” had been on Phrasure’s backburner for a while, and after completing the first few songs for the album, it was clear that the record was moving in a direction that would fit this title perfectly. Songs like “Defy Gravity” and “Like a Daisy” make it clear that these musicians put family first, while other heavy hitters like “By the Time I’m 40” approach listeners with another layer of introspective lyrics.

Although they met for the first time in the studio, the two had something special from those very first moments. “It was probably the funnest time I’ve had making an album with anybody,” reflects Akil. Phrasure came in with all of his verses completed and recorded every vocal for the album (with the exception of a single line in “Good Cookin’”) in one session. The hard work and passion for music turned into early and loud love for Akil and Phrasure’s recent release. “We’ve been getting unexpected reception from this album, and it’s just been really encouraging” shares Pratt.

While the Magic City hip-hop heavyweights are excited about their building success, they also just love being a part of the deeply talented Birmingham music scene. Akil, who is working on leaving his homebody phase to collaborate more with other musicians, shares “I have started embracing the city and it’s slowly embracing me back.” Phrasure, who is known as one of the city’s biggest cheerleaders, responds “I don’t think it’s a secret that I have a deep and honest love for what this city produces. I think that we have a lot of great talent in a bunch of different categories. Not just music but chefs and businesses and activists and so many areas. We have a bunch of great people.” Two great dads of the Magic City just put out a fantastic record, and we’d encourage Birminghamians to support them.