DionRacii Creates One of the Year’s Top Albums with “AmberNovella”

The Birmingham artist’s storytelling and voice shine bright on this memorable record. 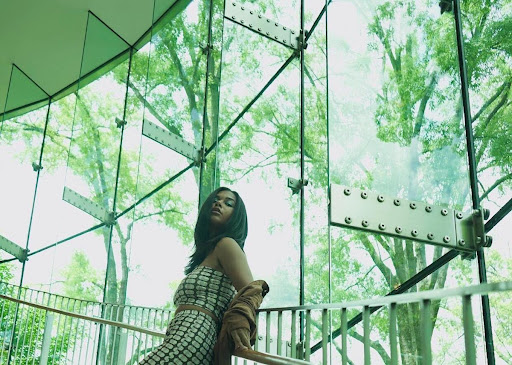 Although Birmingham is full of talented musicians, DionRacii has stood out since the moment she first introduced herself to the scene in 2016. Live performances and a steady stream of video releases have showcased her distinguished voice and lyrics to a growing base of loyal listeners. Over four years of hard work and strategic decision-making built this fanbase, but one surprising aspect of this musician that makes her rise even more impressive is that DionRacii had never released an album until this year’s beautifully put together AmberNovella.

The fact we get any music from this talented songwriter is a blessing in itself. DionRacii had known she’d wanted to sing as a kid but had a terrible fear of singing in public. Growing up, she’d try to chip away at this dilemma by participating in forms of entertainment like creating funny skits with her siblings and speaking during school performances in middle and high school.

“I wouldn’t be singing, I would just be talking,” she said. “I kinda took the leap when I went to college.”

College took place at North Carolina A&T during the fall of 2015. DionRacii, then known by her first name Sa’Rah, was still running from her dream of singing and decided to pursue a career in journalism. One day in class, a fellow student stood up to share how excited they were to be pursuing their major. One by one, other students shared their similar sentiments. When it came Sa’Rah’s time to express her joy for journalism, she realized that she wasn’t pursuing her passion. Shortly after, she met another student at school who shared he was feeling pulled to music and may leave school once the semester ended.

“It laid on me heavy because I was feeling that same way,” DionRacii said.

She left school, her comfort zone, and her life plans that December to buy audio equipment and jump full-force into accomplishing her true life purpose.

Her first performance followed shortly after. Sa’Rah was armed with a collection of well-written songs, but had to finally take on her fear of performing publicly.

“I wrestled with myself and I cried,” she shared of the moments before she took the stage, but decided  “I don’t care if I cried all the way there, when I’m on stage I’m gonna be good and I’m gonna rock it out because this is what I want to do. And that’s what I did.”

The show was a success, and brought in the first of DionRacii’s supporters. She would continue to perform live while releasing top-quality music videos to compliment her catchy tunes. “Spaz” and “Half of Us” kept the buzz growing. During this time, Sa’Rah switched to using the name DionRacii after seeing it appear in red during a dream. She had half the songs for her EP completed in these early years, but knew that it wasn’t quite time to release an album.

“I wanted to make sure that every song highlighted my lyricism and how important storytelling is to me,” she said.The entire record needed to be full of really great musical arrangements.

The rest of the songs came to DionRacii this year, and the result is an incredible 16 minute journey that soothes the ears while filling the mind with detailed storylines. The name “AmberNovella” pays tribute to the literary term that describes a piece that’s too long to be a short story, but too short to be a novel. That beautiful medium, as Sa’Rah describes it. Each song doesn’t waste time to get to the point, yet leaves a lasting impact.

The reception of the album since its release has been nothing but positive. DionRacii was worried people would feel impatient after waiting for nearly half a decade, but instead her fans were happy she took her time and, in her words, marinated on it, to really focus on putting out the best possible product. The album cover was shot and designed by rising Birmingham creative Sophie Engobor.

The most recent music video released to support the album was for the song “Live Fast”.

“I really wanted to highlight the simplicity of love,” she said. “It ain’t always y’all doing grand stuff. Love is sometimes just y’all going to Publix, sitting in the car.”

She goes on to say in the age of social media it’s easy to think you’re not being loved if you aren’t constantly being bought lavish gifts, but it’s the simplicity of it that makes it so beautiful. The video, which is shot in a more movie-style without any serious effects, and the song, which features only a bass, guitar, and her voice, reflect the beauty of simplicity as well.

Much like her own success, Sa’Rah sees how Birmingham as a city is starting to experience the benefits that come through years of hard work and believing in yourself when nobody else sees the visions.

“I know we have a whole lot of talent in this city, and it’s expanding more and more,” the artist states, “People that have been here committed to their craft, I believe that payoff is coming.”

We couldn’t agree more, and believe the once stage-shy singer will be leading the way when it comes to music.