A group of the Blazers’ biggest fans reflect on their first gameday in the new Protective Stadium. 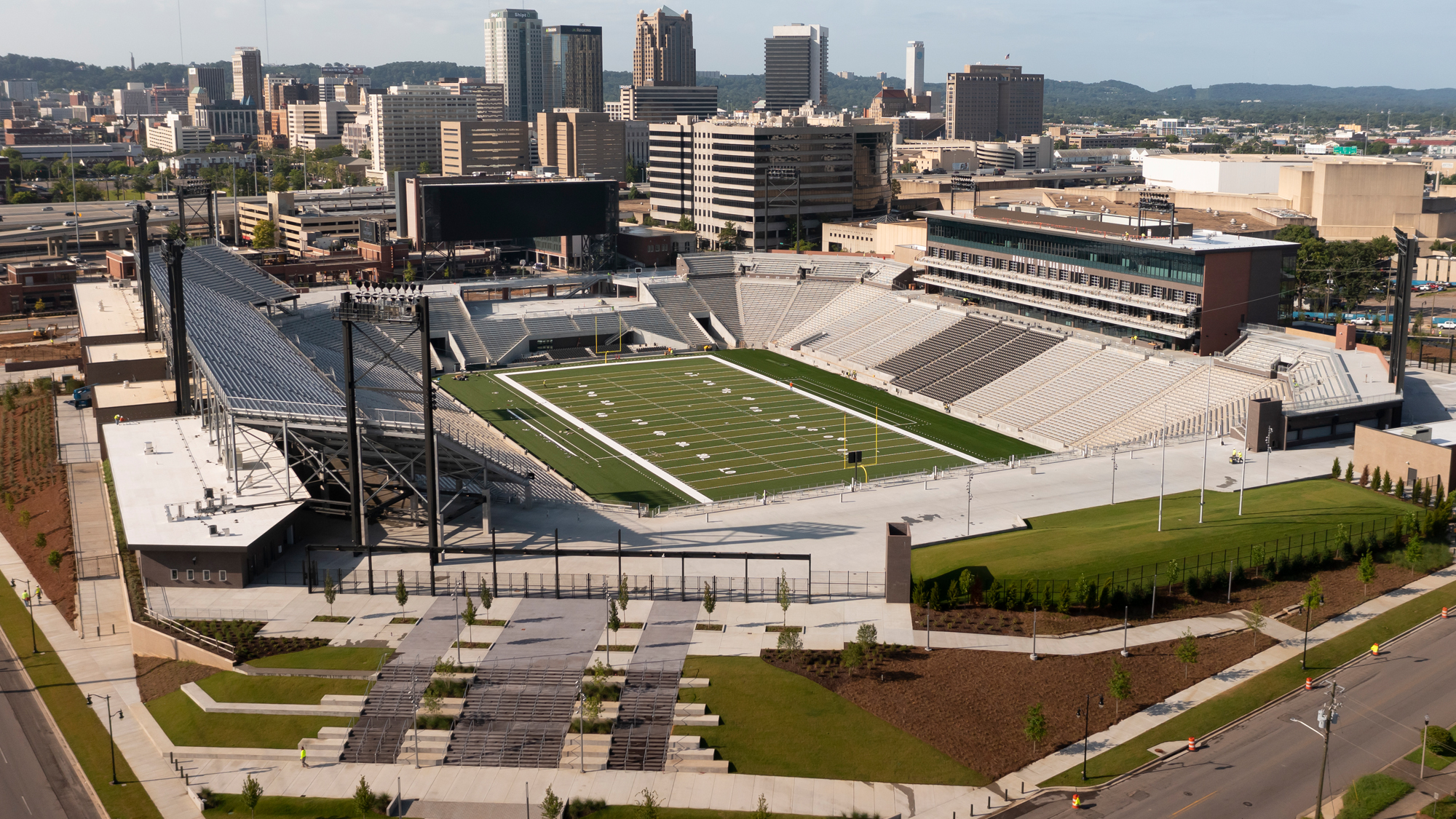 Last Saturday, October 2, UAB football squared off against Liberty, the Blazers’ first game played in the brand-new Protective Stadium. And, though the Blazers lost the game that night, really, UAB won – the first game in Protective Stadium marked a culmination of years of hard-fought battles towards “The Return,” bringing back UAB’s football team after it was terminated after the 2014 season and giving the team a permanent place to play. Ahead of tomorrow’s contest against Florida Atlantic – UAB’s second game in their new stadium – About Town spoke to some of the Blazers’ biggest fans about the experience at the new stadium.

“It’s been an emotional rollercoaster,” said Chenise Ryan, who earned both her bachelor’s and master’s degree at UAB and who now works there. “To disband the program, but then return even bigger and better – the stadium was just a culmination of the blood, sweat, and tears that went into ‘The Return.’ It’s what so many people have fought for.”

Many of the fans at the game cheering on the Blazers either went to UAB or work at UAB. For them, it was a moment they thought may never happen.

Superfan Rod Richardson was almost killed in a car accident in 1993. “UAB put me back together,” he said. He was hospitalized in the trauma unit for 15 days and in a wheelchair for seven months; his optimistic attitude only allows him to say, “I was blessed it wasn’t worse.” In the early 2000s, he began to attend UAB football games, and in 2010 became a season ticket holder.

Kristin Chapleau has two degrees from UAB and is employed there, working frequently with UAB student-athletes. “Their ability to not only excel in athletics but also in academics and their commitment to service is truly inspiring,” she said.

Kristin Chapleau: My family and I attend and tailgate with a group of friends from college, “The Greenbackers.” The group began as a few faithful fans soon after we graduated but has now grown to over 100 members that includes faculty, staff, alumni, children, spouses, parents, and friends – the UAB Family feeling. Every time I attend a game, I come home feeling a part of something greater than myself. Whether it is the student-athletes and band members who thank you for attending or high-five my kids, or the colleagues and friends I run into and chat with before and after the game – I’ve never left a game feeling lonely.

Justin Kirk has his undergraduate degree and his Doctorate of Physical Therapy degree from UAB, and as a physical therapist has worked alongside the UAB Athletic Training staff and team doctors.

Justin Kirk: It was hard not to tear up while watching Protective Stadium come to life, because the UAB community has fought what felt like an unending, hopeless battle for a stadium to call their own. Despite the growing momentum of the #FreeUAB movement, it seemed like the only answer we would ever get in regards to a new stadium would be “no.” When the program was shut down in the midst of the excitement of our first bowl-eligible season in years after Coach [Bill] Clark’s successful six-win record, it was devastating. I remember standing in the football facility parking lot watching grown men hugging and crying when the announcement was made. Protective Stadium means so much to the Blazer Family because it means we’re here to stay, and it’s a monument to the hard work of those who tirelessly kept pressing forward. Protective Stadium is truly something to be proud of because it signifies the hopeful miracle that made college football history.

Chenise Ryan: It was absolutely surreal. It’s just stunningly beautiful. The energy was electric, and everyone was smiling from ear-to-ear. I saw friends – from as far away as Iowa – who I haven’t seen in a long time. It was like a reunion. I cried twice – when the team took the field and when the band took the field. Just covered in chill bumps.

UAB is Ryan McLaughlin’s alma mater – “Birmingham is my second home because of UAB and the people,” he said.

Ryan McLaughlin: UAB is an amazing institution. It’s the only reason I would ever move back to Alabama. Birmingham is an amazing city with amazing people. I’m so happy that they’ve been in our corner all the time. [Mayor Randall] Woodfin, [former Mayor William] Bell – all of them have backed us throughout the years. They know what we mean to the city and what the city means to us. We fought for this. It was poetic. Instead of a phoenix rising from the ashes, it’s a damn dragon!

Natalie Brewer: I really don’t have the right words to describe Protective Stadium other than incredible and amazing! I was blown away and all I can say is you have to come to a game to experience it for yourself. The location is great – you can tailgate at Uptown and just walk over, which is perfect. And the Blazer Walk, when the team came through and entered the stadium, gave me chills.

Daniel Walters: Walking into the stadium was something special. Entering through the front gate, surrounded by a sea of people wearing forest green, walking up the inclines, building the anticipation. Then walking out to the stadium and seeing it in all of its glory. Not going to lie – I had tears in my eyes.

Just like the fight song says, I’m an “Ever Faithful, Ever Loyal” person. I’ve been to a lot of other college stadiums, but none that was ours. Even Legion Field [where the team used to play] was a stadium from a different era. It wasn’t ours. Protective Stadium is ours.

Christina Carrier, also an alum, met many of her best friends and her husband while a student there. Her son was born at UAB, and she was employed there for five years. “It has been a big part of my life,” she said.

Christina Carrier: I have to say it is something we have always talked about – having our own stadium. The thought of being able to tell our kids that we were at the first game ever played there will be a cool memory to be able to tell them.

Born and raised in Birmingham, two-time UAB alum Jared Ball has watched the journey of UAB football since birth.

Jared Ball: With the brilliant work and persistence of so many people in the community and within the UAB administration to bring the team back in 2017, the program has been as successful as it has ever been with two conference championships since then. Protective Stadium is, in a way, a culmination of all the work done over that time. With it, the Blazer program has a jewel in the heart of Birmingham, in the middle of a state that lives and breathes football, that they can be proud of and attract others towards to help take the program to even newer heights.

The coolest part was seeing the student section being loud and doing their best to make the environment tough for the road team – you could hear their roar from the other side of the stadium.

Justin Kirk: From the layout of the stadium to the fonts on the signs, you can tell Protective Stadium was built with the fan experience in mind. I appreciated that there’s really not a bad seat in the house, and visibility was clear from all angles around the stadium. The Jumbotron was beautiful and much easier to see than the one at Legion Field. I was also really impressed with the food options – one vendor even had shrimp and grits! – draft beer, and the Birmingham city pride that went into naming the different concession booths after local features.

Kristin Chapleau: “The Return” was a huge moment for our team. Considering the battle the Blazers – athletes and fans – fought and won to step into our stadium, the outcome of the game really didn’t matter. We were winners going in and will continue to battle and protect our new home – Protective Stadium – for years to come.

Jared Ball: The best is yet to come for UAB football. The future is bright, and while Saturday’s game result wasn’t what anyone desired, there will be a lot of wins that will be celebrated in that stadium and championships to follow.

Chenise Ryan: I’m just so grateful. Grateful for visionaries like Coach Bartow and Dr. Scotty McCallum who knew we would be here one day. Grateful to Coach Clark for sticking with us when times got tough. Grateful for a group of students, alumni, fans, and business leaders who didn’t give up. Grateful to UAB leadership and the City of Birmingham. Just eternally grateful.