Here's how seven women muralists came together to create breathtaking works in Woodlawn. 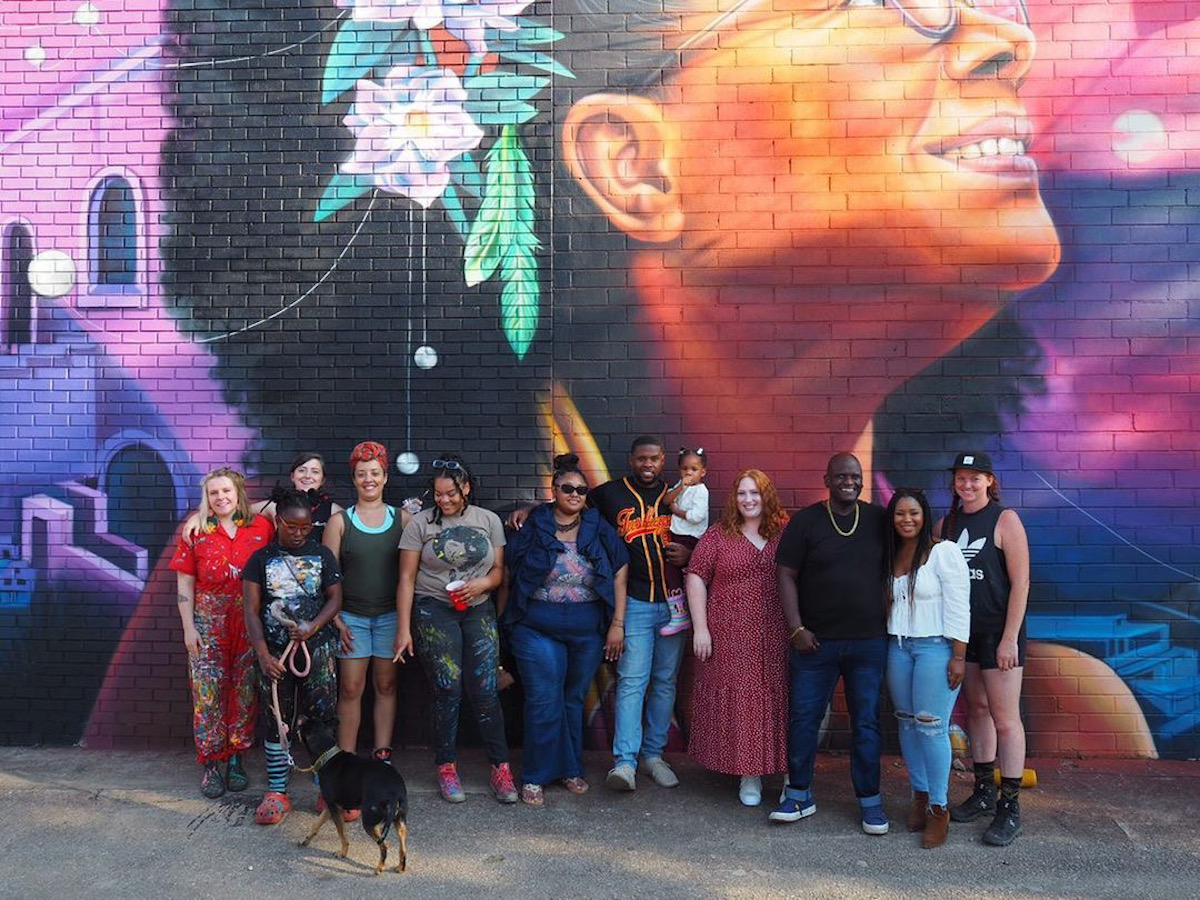 It’s no secret that Woodlawn is going through exciting art and business transformations. Many residents of this Birmingham neighborhood are both ready for growth yet weary of being excluded from the inevitable changes ahead. Jason Avery and Meghan McCollum are aiming to provide the best of both worlds to the Woodlawn community with the first ever installment of the Magic City Mural Festival. This year’s festival features seven muralists on six walls and is titled “Women Painting Woodlawn.” The murals can be found in the alley behind the East Side Funeral Home off 1st Avenue North.

Jason and Meghan met over two years ago. Jason was working on neighborhood projects for UrbanMain, an organization that aims to revitalize historical cities, towns, and neighborhoods by taking a community-focused approach. He asked Meghan, the founder and owner of Blank Space Bham, for consultation help and when he inquired on how to compensate her she asked for a favor instead.

That favor was to help find a wall for a local high school artist looking to paint their first mural. As Meghan and Jason were walking between buildings in downtown Woodlawn to get to a potential location, they both stopped and looked at each other–in that moment knowing they had found the headquarters of something magical.

The result of this synchronized vision is the Magic City Mural Festival, and the beginning of a new hangout spot for the Woodlawn community. In addition to the six current masterpieces being put up, the alleyway has been cleared and will soon feature a projector with screen for visual art and films along with benches made of discarded wood pallets found in the alley. The first film shown in the alley is titled “Her Voice Carries” and will be displayed next to the mural of the artist who directed the film.

“We want people to be hanging out here,” shares Jason. “This is our outdoor art gallery.” Everything from open mic poetry nights to outdoor paint parties are easy to picture once you step foot in the colorful space, and the community plans to use this new opportunity.

The murals weren't meant to be “just for murals sake,” but capture what the residents of Woodlawn would like to see – and the application process reflected that. Questions about artists having social responsibilities and the willingness to become involved in a community found six muralists who weren’t only experts at their craft but dedicated to “helping communities reclaim their own narratives.” The muralists selected from this process were Nico Cathcart (Richmond, Virginia), Jamie Bonfiglio (Birmingham), E.L. Chisolm (Atlanta/Birmingham), Sophy Tuttle (Boston), Lydia Walker (Birmingham/Los Angeles), and Sarah C. Rutherford (Rochester, New York). One of Birmingham’s favorite muralist groups, bendyknees design co., also volunteered to help with preparation and paint.

The results are breathtaking, and many chose to highlight local causes and people. Nico’s work is centered around humanity’s symbiotic relationship with nature, and features a child holding the earth while surrounded by plants and animals that are only found in Jefferson and surrounding counties. Sophy chose to feature a Woodlawn resident, which made for a brilliantly colorful piece highlighting a student who won an essay challenge. E.L.’s mural features a Birmingham firefighter who inspires her and draws parallels to other careers people often tell women they can’t pursue – another being an artist. Another mural features designs created by students from the area.

Every mural brings a powerful message in the form of dazzling colors in impressive detail. Lydia’s piece is in collaboration with Jhamasa Lewis-Adams and highlights the importance of sisterhood–not only through literal family relations but those who’ve been there for you because you feel like family. It quotes the poet Rupi Kaur in saying

“it isn't blood that makes you my sister

it's how you understand my heart

as though you carry it

Sisterhood and the power of women was certainly a priority in this first festival. It’s rare that women muralists get such a big opportunity to showcase their work on such a large scale, much less while getting paid fairly and meeting artists in similar situations. “We’re just excited that we could create, not only this narrative for Woodlawn, but an opportunity for women to shine,” shares Meghan. And shine they did, as the near-daily rain, broken lifts, and other challenges couldn’t prevent six of the cities most jaw-dropping murals from being formed in a week’s time.

Jason noted that the dedication of the artists to get the murals done and send purposeful messages reminded him of the women of Woodlawn who’ve stayed in the neighborhood over the years and “held things down,” saying “It’s the perseverance, it’s the resilience.” His appreciation of both this project and his neighborhood is shown by active efforts to improve Woodlawn for those who call it home – and he’s far from the only one who feels this calling.

“We have the mantra that we are Woodlawn United,” he shares, explaining “that means residents, that means the business association, the neighborhood association, our nonprofits such as REV Birmingham, the Woodlawn Foundation and YMCA. We want to make sure that there are three pillars mainly that we stand on for moving this community forward. We want good education. We want community wellness including mental health, and we want quality mixed-income housing for everyone.”

This placemaking project is moving things one step further in that direction, and Meghan wants to emphasize that all of this happened from everyday people with other jobs who didn’t wait for permission to make change in their community. They don’t have distinguishing qualifications, they just care – and they aren’t the only ones. “There are a lot of people that are hungry for change, and that are going for it,” she comments. And that includes new businesses by local leaders Trynab Studios, Woodlawn Bar and Lounge, and Woodlawn Theatre coming to their block in the near future. It also includes plans to paint the rest of the wall, hopefully at next year’s Magic City Mural Festival.