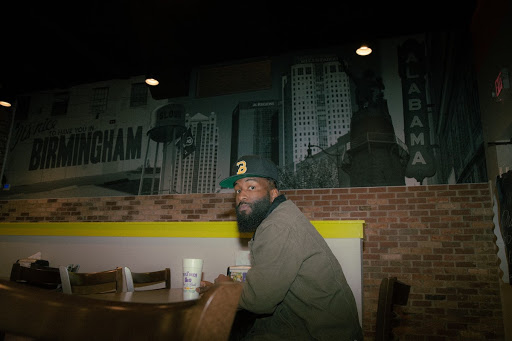 Chris Butler is a familiar face to those who’ve tapped into the magnificence that is Birmingham’s hip-hop music scene. Known as ChriStyle while on stage, the longtime member of Bham supergroup C1ub:A.M. has built a sturdy reputation as one of the city’s most thrilling lyricists by unloading line after line of meaningful truths over beats that are often created by himself.

The recently released video for “Sunny Side” is a perfect example of the talents that thrill Magic City music fans. Purposeful statements easily flow over a breezy beat with a catchy saxophone ringing in the background of the chorus. As Chris puts it, this song is a direct look into the musician’s mindset at that time. He’s going to talk trash but provide motivation in the same sentence. The visuals by Jeremiah Fanning match ChriStyle’s talent, providing a quintessential Southern experience for all those fortunate enough to lay their eyes on the video.

The lyricism and production may seem like natural gifts, and that does play a role. But years of truly diving into the craft and being surrounded by a group of similarly-motivated musicians have uplifted Chris into this realm. He got serious about the art of storytelling shortly after graduating high school, and it didn’t take long until he formed C1UB: A.M. along with the unique wisdom of ChikN’ Jorge and the sharp-shooting lyrics of Whosaine Jett.

The group quickly became a force at local hip-hop shows like Lobotomix, while also playing the Seasick Stage at Sloss Fest and dropping some of the city’s favorite albums. The musical trio is “still in the club” (as their unofficial catchphrase references) but is also working on their individual projects. For Chris, that looks like dropping high-quality videos for songs he’s been holding onto.

While he makes this rap thing seem fun, ChriStyle is quick to mention that he and his musical peers are dedicated to perfecting the craft. Just as iron sharpens iron, Iron City musicians get motivated by the incredible pool of powerful poetry over backing beats from their Birmingham music peers. “We have that little community of artists down here, and it’s still growing. I think it’s a little bit of friendly competition too, whether it’s talked about or not. “Everybody wants to be at the top of their game, you know- hone their skills” comments Chris on the motivation of those around him.  He goes on to say “We all want to be great at what we do. We’re not doing it just to be doing it.”

Hip-hop heavyweights like K.L.U.B. Monsta, The Monastery, YouGene Write, Michael Kure, and Bimbo are a small example of this collective of inspired minds that continue to build each other up through support and slight competition daily. While his break-neck stream of meaningful lyrics attempts to steal the spotlight, ChriStyle is just as smooth on production. He’s provided the backdrop for many of the previously mentioned musicians at some point and is generally the producer on his own songs as well.

When Chris reflects on the city, he sees greatness but hopes that people will take the time to leave their comfort zones and push for something greater together. He points out that society as a whole and the music scene share a similar illness in that many are “almost kinda being content with the way things are, and that’s wild because we know things can be better - things should be better.”

We truly hope anyone reading this article has taken the time to listen to ChriStyle’s music. As he says so eloquently in the Southern-soaked jam B.A.M.A.S., “Better ask momma about Styles, they underestimate us cause we coming from down South.” Alabama (and Mississippi) are often overlooked when it comes to music - but it is not due to lack of talent. Chris and those around him are ready to bust in the doors and ensure this world gets blessed with the important words and style that can only come from the Magic City. For those who are already in the fan club, he shows nothing but appreciation and promises to deliver more gold in the not-too-distant future. “As long as y’all still out there, I’ll be back.”