The ever-humble Magic City personality shares what got him to this point. 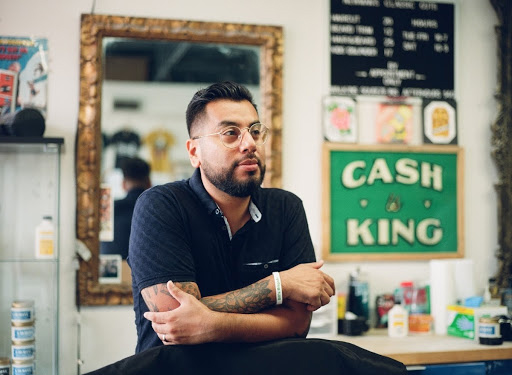 If Birmingham was a person, the city would have to look something like a DJing music producer who also happens to cut hair in a record shop. Or maybe an activist spirit wrapped in a humble mindset that always looks for opportunities to show others love. In either case the spirit of the city looks a lot like the spirit of Suaze.

The beginning of this Birmingham fixture’s creative journey took place in sunny California. A young Suaze’s father, a music-loving preacher, was patiently encouraging his son to take up an instrument for himself. When Suaze was 11, he asked his dad to teach him the bass lines from two songs his dad always played. His dad showed him one and promised to teach Suaze the other if he learned the first by the time he returned from work. When his father returned, Suaze had already learned both bass lines! Needless to say, his pops was impressed and quite joyful at this news. The two went to buy a bass that day then asked the church’s Praise and Worship leader to teach Suaze how to play.

A love for music quickly turned into a burning passion for hip-hop, which led to Suaze and a friend convincing their pastor to allow them to record hip-hop beats with church equipement. The focus at this time wasn’t necessarily creating new beats, but emulating backdrop to his favorite songs. As he began to understand the craft, Suaze learned more about samples - which led to him digging through record crates. Eventually the music connoisseur developed two stacks - one for songs he wanted to sample and another of songs that had already been sampled by famous producers he looked up to.

Production was still Suaze’s main goal, and he was eventually able to buy a 4-track to record some small beats made on borrowed equipment. He met another musical entrepreneur in high school who had a computer with recording software on it (a rare feat in the 90s), and they quickly got to making beats then putting them on CDs to enjoy and freestyle to.

Around the same time, another life calling tip-toed its way into Suaze’s life. A journey to Luvd Ones barber shop in San Bernardino introduced him to the talents of Rodney, and Suaze was determined to get a fresh new haircut from this talented barber once a week. Unfortunately his parents couldn't afford $10/week, so he decided to go in another direction on his journey to flyness, and asked his parents for a pair of clippers - which he got that Christmas.

This thoughtful gift led to a Christmas night massacre of his hair, but he stuck with it and eventually had people coming up to him asking who his barber was because it looked so impressive. He started cutting his friend’s hair which brought a whole new learning curve, as Suaze only had experience cutting his own hair up to that point. “I have a lot of friends and a lot of cousins who I have to thank for allowing me to ruin their hair” the barber reflects in appreciation. Money wasn’t the motivation, it was just a group of poor kids in California looking out for each other. He’d often get gas money or lunches in exchange for his hair services.

By the time Suaze moved to Birmingham, he began finding his own sound in production and started introducing personal instrumentation to songs he was creating. He was also mixing music at get-togethers with friends, but not ready to label himself a DJ. (He still shys away from the title, saying too many great musicians spend their whole career perfecting the craft for him to share the recognition). But by the time he moved to a new city he was burnt out on music and ready to hang all of it up to focus on family and his career.

About a year into life in the Magic City, Suaze found himself once again making beats - this time on the work computer at his bank job. “I don’t recommend anybody do that at work, but I did and it worked out for me” commented Suaze. Although he was taking a risk at work, he was doing it for his own creative interests - not to jump into the Birmingham music scene. That changed one day when his good friend and coworker Gilberto Herrara (who has also become a major force in the Magic City) told Suaze he recently listened to a group by the name of K.L.U.B. Monsta and believed Suaze’s beats were perfect for their sound. Joshua, one of the group’s members who is now a close friend of Suaze, soon reached out and invited Suaze to come play some beats for the group. They ended up taking a few of his beats to rhyme over, with one being used on their “CANVAS” album.

Klub Monsta then recommended Suaze work with JazzMine Garfield, who the producer accurately describes as “one of the most talented people in this town”. The pair began working together and created a bunch of songs, which garnered the attention of Birmingham and beyond. Songs by the duo were featured in Afropunk and other highly-esteemed music sources. JazzMine then asked Suaze if he’d like to work with another artist by the name of Love Moor, and he said he’d give her a call. They linked up and created a few songs for her first record, “Blue Polka Dots”. Love Moor later introduced Suaze to You Gene Write and LDLR, and he was soon one of the most sought out producers in the city. “We were all very green” describes Suaze of the status of these now-heavily established musicians all feeling each other out for the first time.

The music ambitions were excelling, but Suaze still needed to work at the bank for income. Then the musician had to travel to California after the passing of his father and barely had enough money to get out there and back. Surprisingly though, he came back to Alabama to learn his wife, Enisa Perez, had gathered enough money to gift him the amount needed to attend barber school and start the journey to a new career.

Around the same time, Suaze checked out the newly formed Seasick Records after a friend told him about the unique shop. Soon after he had his interest peak when the business announced they’d have a barber cutting hair in-store. Suaze saw the barber, Newman’s Classic Cuts, tagged in the picture and reached out as a friendly gesture. A friendship soon developed and Newman even asked Suaze to cut his hair when Seasick had their grand opening at the old Crestwood location. Three months after that he was offered to join the record store barbershop, but he still had classes and finances to worry about.

He ended up working 7 days a week (bank on weekdays and barbering on weekends) for the next year. At the end of the year, he had a conversation with the same wonderful wife who supported his dream about taking the jump to full-time barbering and she had his back 100%. He now fully funds his life through his three passions: producing, DJing, and barbering.

“I owe this city a lot. This city has been very kind to me and my family” reflects Suaze on his years of growth in the Magic City, “I don’t take any of these opportunities for granted. I work really hard so every day I put my best foot forward with everything I do because it’s my art, it’s my name, and I’m also appreciative of every opportunity I have here. I don’t know why the city shows so much love. I can’t wrap my head around that.” He aims to pay the city back by bringing his Latino Los Angeles experience to a city that is ready to embrace different experiences, and encourages others to do the same. “Wherever you come from, bring that flavor to the city. It’s our responsibility to create more culture in this town.”

Suaze certainly does this and more. One of his current methods of doing so is his weekly sets called Pastime Paradise with local digital radio network Substrate Radio, where he spins everything from jazz to soul to house music every Sunday beginning at 12:30pm. He also partners with the great DJ Rahdu to form The Shure Shot DJs to “rock parties and play songs that you’d normally never hear outside of their DJ sets.” Every ounce of Suaze seems to be focused on giving love to his family, his community, and the things that unite us. Maybe that’s what makes him so easy to root for.