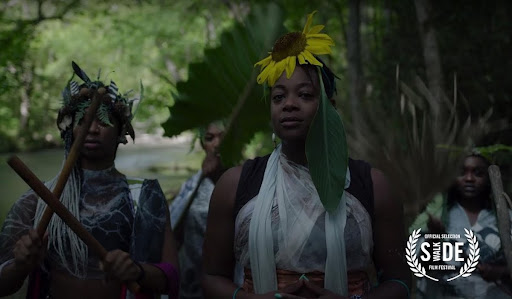 Sidewalk Film Festival has been a Magic City treasure since its founding in 1999, and the last decade has brought national attention to what once felt like Birmingham’s hidden gem. Aspiring filmmakers from across the world submit their works in hope of being a part of this fantastic annual event, but Sidewalk still makes sure to provide a focus on the incredible directors who call Alabama home. We spoke to three of this year’s featured filmmakers from Alabama on their feature flicks, and encourage you to support them this weekend!

Jena Batiz is an inspired student at Birmingam-Southern College (who also happens to be an intern at About Town Magazine!), but the media and film studies major didn’t expect that her submission to Sidewalk as part of one of her classes would end with her being featured in the festival. She has always been passionate about the creative arts, and decided to pursue film after making the move to BSC from community college and seeing the college’s program. “The Lost Butterfly” is her first project at the university, and it certainly seems that she’s on the right path.

Her film is inspired by a short story Jena wrote in middle school which has been modified a good bit since. “This girl has a wall where she writes her own affirmations on it, but one day one of the butterflies on the wall mysteriously disappears,” Jena shares of the film’s premise. Editor Mallie Taylor, actress Gia Warren, and producer Andrew Scofield supplied most of the help completing the move - with many of the props coming from Jena’s home. Jena wants aspiring Alabamians to know that even though it is a difficult industry to thrive in, don’t let others’ attempts to limit your vision or hold down your path to creative success.

“The Lost Butterfly” will be showing at the Black Lens Narrative Shorts showing on Sunday at the Boutwell Auditorium Exhibition Hall from 12:45pm to 1:58pm. You can view the full schedule here.

Carey Fountain has been making an impact on the city through every medium at his disposal. His work with the Birmingham Museum of Art, his music, murals, visual art projects, and unique event concepts bring things to the Magic City that would not exist without his presence. He continues this journey with the release of his latest music video, “Thursday”. The film is directed by Bknott, who has been behind the camera for some of the most creative videos put out in the Birmingham hip-hop scene.

The video is partially inspired by the classic film Groundhog Day, and features a daily rock, paper, scissors tournament located in a post-apocalyptic jungle. Carey continues to repeat the same Thursday and keeps losing in the tournament, until someone comes in to alter events. Both the video and the song feature Carey’s son which make the project even more special. Carey knew he wanted the film to showcase the Black experience and made an active decision to showcase positive moments to contrast the pain we are always shown. “You can watch it, and enjoy it, and be proud to be Black.” Set and costume designer Celeste Amparo Pfau, Jamison Brown, Alex Kiker, over a dozen incredible actors, and more helped turn the vision into a Sidewalk-showing reality.

“Thursday” is screening in the Music Videos showing on Saturday night at the Boutwell Auditorium Exhibition Hall from 10:20 to 11:40pm.

Anissa Latham knew she enjoyed documentaries and other filmmaking endeavors, but didn’t know what that meant for her future until she went to UAB and met professors like Michele Foreman, and it started coming together on how she could make it in the industry. She graduated in 2017 ready to make films but never expected that she would have a commissioned piece so quickly. “If you told me at the beginning of the pandemic that I was going to make a film in 2020/2021 that would be on this level, I would think it was a joke” Anissa shares on her Sidewalk Film debut.

The film features her friend and Birmingham poet Dikerius Blevins and is centered around injustices he experienced in Hoover last year. His poetry is used throughout the short film to add even more depth to the storyline. The film was submitted to Reel South, who then commissioned it along with Firelight Media and the Center for Asian American Media as part of the Hindsight series and will be distributed by Reel South and World Channel. The film will also play on PBS in November, has already played at AFI DOCS and will be playing in Milwaukee in September but being in a Birmingham festival was Anissa’s biggest priority. “If it doesn’t get anywhere else, that’s fine. I just want Birmingham audiences to sit with the history that we’ve created about this city and check whether or not the things we’ve said about the city in the last 10-15. Does that still apply?” Her film has already been shown once, and Anissa said while it’s scary to watch an audience react to your film for the first time, it’s important to share these messages and interesting to take in.

“Missing Magic” is showing with the Alabama Documentary Shorts #1 screening Saturday morning at the Alabama Theatre from 10 to 11:12am.

The core theme that we picked up on while talking to these three rising filmmakers is the importance of Sidewalk, the importance in uplifting local creatives, and how truly talented the people who live in our city are. Jena, Carey, and Anissa are three of the best to do it this year, and there will be dozens more behind them in 2022!

As Carey Fountain put it, it’s easy to be “proud of Birmingham. I love the city. I think we’re going to look back in a few years and realize the work that we were doing right and have been doing, and how important of a role it is.” And this weekend at the Sidewalk Film Festival will be one of the moments we look back on.