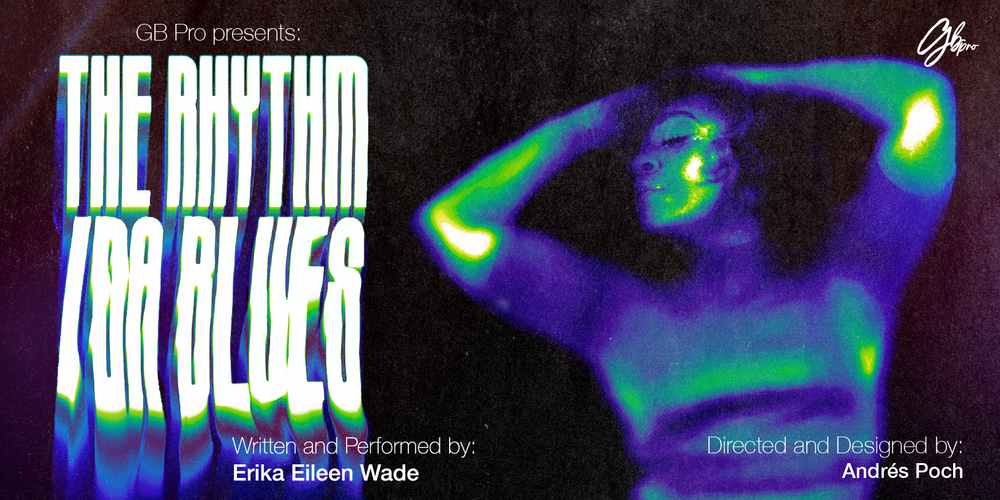 E.E. Wade first found her artistic path in the city of Birmingham, and is returning to the city she grew up in to plant the roots for the Southern branch of the innovative Glenda’s Baby Productions. The company is making its official Magic City debut with a hybrid live and digital showing of the Birmingham-centered one-woman show, “The Rhythm/Da Blues”. The play, which is directed by Andrés Poch, will take place this Friday and Saturday evening at the wonderful new Red Mountain Theatre Arts Campus. The Friday show will be followed by a Q & A segment, while Saturday’s event will be followed by a Wrap Party at Cassanova Bar and Lounge.

“I’m a Birmingham baby. I was born and raised between Dolomite, Pratt City, and Fairfield so a West Side Birmingham baby. I went to ASFA for high school, and I learned to drive downtown,” Wade shares. After her collegiate career at The University of Alabama then The Savannah College of Art and Design for Graduate School, E.E. next found success while living in Los Angeles with frequent visits to New York and Atlanta. One thing that always stuck with her after she moved was the lack of accurate portrayals of people who grew up like her in the South.

“My goal has always been to create content that painted the South in the way real Southerners saw it,” the creative explains. Wade has never been satisfied with the entertainment industry’s attempts at Southern accents and culture. “It’s sometimes close but it’s never quite right,” she laughs about the Southern drawl mishaps of non-Southern actors, “After that you start to move on to the ideals that people really don’t know how intersectional and how rich in culture the South is-including us.” Oftentimes Magic City creatives feel they must leave for bigger markets like L.A. and New York to make their presence felt, which Wade has certainly done herself. “You need to learn everything that you can learn. Go to the places that you need to go, but don’t forget home,” E.E. shares.

“The Rhythm/Da Blues” is more than enough evidence that E.E. lives by the words she tells others. The one-woman production was originally created for her thesis at SCAD. Wade was determined to create material that could be easily formatted to fit a variety of settings. “What can you write that you can throw up on social media or do at a coffee shop or do at a park or in a stadium,” she thought to herself, “How could you stretch out content like that? I came up with the idea to do a solo social because what better way than having one actor that you can pack up and ship to wherever you want them to go?”

Her next task was coming up with the concept, which had no choice but to be influenced by Birmingham just like its creator. The story was formed by moments that were loosely inspired by E.E.’s own life that came together to create a very real narrative centered around a family tragedy that Wade experienced as a child. “I lost my uncle when I was around 8 or 9 years old. He was very close to me. He was one of the first people that encouraged me to listen to theater and soundtracks from theater and things like that.”

Although E.E. had made a one-person show centered around her life experiences, she initially felt uncomfortable playing the role. Her thesis committee asked her to perform it herself and things have only grown for E.E. as an actress, producer, and every other creative role since. The Rhythm/Da Blues would soon be taking Wade to famous stages and executive boardrooms, but she’d first have to accept that she belonged there. “Imposter syndrome was and is something that’s still very present to me. The whole time I’m getting booked for gigs for The Rhythm/Da Blues on Off-Off-Broadway,” she confesses, “Get this now-in a historic theater that has significance to the city of New York here I am with imposter syndrome wondering why people are coming to the show every night. Whether I deserve it. This little Birmingham girl talking on a Birmingham show to these people in the West Village.”

While E.E. was performing the show in New York, a lot of behind-the-scenes work was happening in Los Angeles. A colleague Wade showed the script to introduced it to a colleague of theirs who loved it and showed it to a colleague of theirs, which led to E.E. getting an invitation to meet with MGM Studios the day after her Off Off Broadway Closing Show in New York. “It’s not like I was just so lucky to have the opportunity and to still have relationships with those VPs and executives that gave me that start. I was creating. I wasn’t waiting for people to produce my stuff. If you looked like a dope company and you aligned with the philosophies I had for my art then let’s collab,” she explains, “Let’s try to get stuff out there. Let me learn how to do what I don’t know how to do. I was so anxious about video production for so long, and I think a lot of that is just because I wasn’t doing it and I wasn’t working with other people. Now producing is a piece of cake. It feels natural.”

“Rhythm, dancing, the culture behind music and dance. It's about relationships. Strong familial relationships. Being raised by a village of women. These are all topics that make sense wherever you are, but still it was like the show was calling me to be performed in Birmingham.” E.E. explains that in her show she talks to the audience, fully expecting them to converse back with her, and while other crowds get these fundamental concepts of the play, only a Birmingham crowd can fully appreciate certain references. “I’m doing this with audiences that are relating to the culture but they don’t really understand it, so what better audience than one that will get the names that I’m dropping. The cities, the locations, the events, and the references so I’m very excited to do it in Birmingham for the first time professionally.”

E.E.’s return to Birmingham, and the launching of Glenda’s Baby Productions’ Southern branch, come off years of hard and innovative work by a dedicated team that features people across the nation and in different countries. Wade hadn’t seriously considered the virtual space as her forte as an artist, but felt called to use her talents as an artist to help others during the pandemic and national movement against injustice in 2020. This initially started as a group of friends coming together to talk, then inviting friends to listen to black and brown panels, and eventually snowballed into popular Zoom parties that doubled as fundraiser events for activist causes.

Things reached a new peak when Poch asked Wade if she’d be interested in performing The Rhythm/Da Blues virtually. He’d been working with some colleagues on using tech to keep theater alive during the pandemic. This eventually turned into two seasons of The Juke Joint, which went on to inspire plenty of new content and more productions. The shows featured dozens of people from around the planet, with the Halloween episode seeing 25 cast members in different time zones come together to create a wonderful virtual experience.

One of the early stars of this new virtual reality was Glenda herself, who also plays the important role of E.E.’s mom. “When I first started this company, she was in Juke Joint Live episodes. She had a main segment that I will argue got us a large portion of our viewership. I’m not going to lie and say she wasn’t a star of the show. She was.” E.E., Glenda, and Andrés are joined by other inspirational members including Danielle Earthly and Gabrielle Perez (who has been a core member since the beginning). The company is looking for new people to join the Southern team, so don’t be afraid to reach out!

The Red Mountain shows will be GB Pro’s first time using the hybrid model, which is going to become their primary method of making theater available to all. “It’s really cool. I like the fact that we can hold to the mission of making theater and making content for everyone. Opening up spaces and dismantling gates that were previously kept. There are a lot of people that can’t go to an actual theater for a variety of reasons,” Wade shares, “Embracing what COVID forced us into is going to help a lot of theater and live entertainment spaces to keep their audiences and expand the people who are patrons to them.”

Glenda’s Baby has embraced the virtual world, and is honored to have its first hybrid event in the founder’s hometown. “This city has my heart. It’s very much my lifeblood,” Wade details, “The things I write, the things I say, the things that are interesting to me are very versatile and adaptable but if you know you know. There will always be a reference to driving your car up a hill, or the Classic Weekend, or fireflies. There’s always going to be something that I grew up with. I think that speaks to the quality of art and how a place inspires people.”

We are thankful to have someone so talented telling Birmingham stories.