The Birmingham band is excited for their fans to hear their evolving sound. 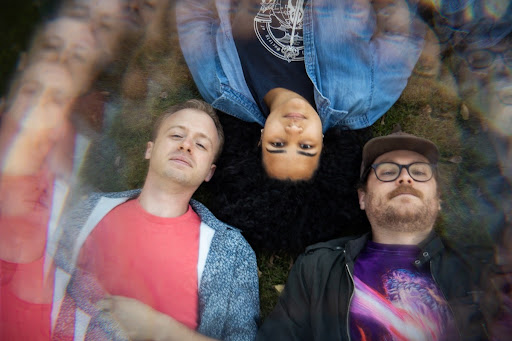 Venture Boi has quickly become one of Magic City’s most exciting bands, with the three-piece ensemble using their talents to send listeners on ear-pleasing mind adventures for more than three years now. The ever-increasing mutual respect between the band and their home city is bound to take another step forward with the release of the group’s latest single, “Parallel Universe,” which dropped November 19.

The song is Venture Boi’s third single released this year, following “After Hours” and “Visions”. The band, which consists of Matt Sanderlin (vocals, keys, guitar), Cameron Riddle (guitar), and Mila Oliveira (bass), has spent the last year allowing their sound to transform into something new while still keeping the same dreamy aspect that their original fans fell in love with. “Parallel Universe” highlights this change, and the song’s creation almost mirrors the band in showcasing the power of letting yourself grow.

“What you heard sounds nothing like what it was,” shares Cameron as the band’s members describe the layers of major changes –- and sometimes total abandonment -- that led to what feels like the group’s consensual favorite song they’ve released to date. Before Venture Boi even entered the studio the song saw a new bridge creation, a new recording strategy after Matt watched a breakdown of Queen’s “Bohemian Rhapsody,” and lyrical changes.

“Just cramming this demo full of ideas, and then be willing to, when you walk into the studio door, let go of all of it,” details Matt of the band’s mindset on creating the song, “Which is really hard for me because I hold very preciously to every guitar part, to every bass line, to every lyric. And this is such a good exercise on letting go.”

A big change in the lyrics came after the group asked Venture Boi’s most recent member, Mila, to take a look and make some edits. “I just feel so spoiled in a band in terms of melodies and coming up with parts,'' shares Mila, but the band’s bassist came prepared to elevate the message to another level. Venture Boi is known for using their songs to paint an image in the listener’s mind, often using metaphors to do so. Mila balanced the storytelling by bringing a more direct approach to key lines, ensuring the vision is clear to all who listen.

Mila isn’t the only new influence on the band’s sound. They are purposely leaning into expanding their sound with musicians who understand the group’s 80s dreampop wonderland. This “makes the evolution process that much smoother because we’re all headed in the same direction. We might take different avenues to arrive there, but we’re all wanting the same thing. We’re all seeing the potential sound and the different direction that this can go.”

One recent example is Moxie Hotel’s Price Pewitt adding a bassline for “After Hours” that transformed the song into a whole new vibe. For “Parallel Universe” the group continued this mindset of “surrendering some control” by working with Nashville-based producer Micah Tawlks, who has built a strong reputation through his work with The Brook & The Bluff, members of Paramore, and other big names. Venture Boi was especially excited to partner with Micah since he works in multiple genres, and their song was likely to leave the studio sounding very different than what they envisioned –- in the most beautiful of ways. The result was “expectedly unexpected. I could have never guessed what he would have suggested, and that’s exactly what I wanted.”

“Parallel Universe” is the latest introduction to the evolving Venture Boi, and it’s a resounding success. A band that was first formed in 2018 for what was meant to be a one-off farewell show before Matt moved to Nashville continues to be pushed forward by the support of the Magic City -– and they are excited to see the city reaching new heights as well. The group recalls the days when WorkPlay and the occasional opportunity at the beloved Bottletree Cafe were the only places locals could perform, and when a sound like theirs might not have prospered in Birmingham. But in the year 2021 t’s safe to say both city and band are finding bigger opportunities to shine, and they are intertwined in doing so.