“We Want ‘Bama: A Season of Hope and the Making of Nick Saban’s ‘Ultimate Team’” is a great read for sports fans and casual readers alike. 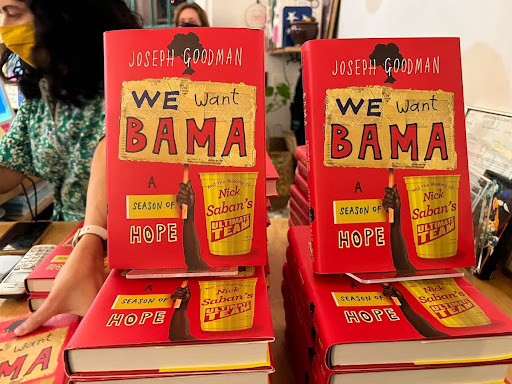 The University of Alabama football team played a history-making season in the fall of 2020, ending with another national championship for Nick Saban and his team of collegiate superstars. DeVonta Smith, Mac Jones, and Najee Harris are just a few of the names that helped the Crimson Tide complete an undefeated season that featured 11 victories against SEC opponents and ended with dominant performances against Notre Dame and Ohio State.

Sportswriter Joseph Goodman joined people across the nation in feeling inspired by the most recent incarnation of Alabama football–and it went beyond the football field. In a year overrun by a global pandemic and national unrest, Alabama football remained a bright light of hope for many. As elated as Joseph was about the opponent-crushing year the Crimson Tide had, he felt even more of a thrill watching Nick Saban and the Alabama football team march to the schoolhouse door to demand racial justice–at the same college where an Alabama governor stood in an attempt to block black youth from attending the university in 1963.

Joseph knew something special occurred in Tuscaloosa, and while football certainly played a prominent role in this story–the impact of this team would go far beyond the seats of Bryant-Denny. He firmly believed the Crimson Tide’s actions off the field contributed to the unstoppable force they were on the field. He saw a story that needed to be told, and was the perfect person to tell it.

Goodman grew up in the Irondale area, and has always had love for his home city and state. He attended John Carroll and Shades Valley before enrolling at UAB, where he studied English and Journalism while writing for Kaleidoscope and small town newspapers like Jasper’s Daily Mountain Eagle and The Cullman Times.. After graduating, Joseph went to work as a sports journalist for the Miami Herald. He first covered high school athletics before being assigned to the Florida Gators, then the Miami Heat. Joseph was living the dream life and writing about the NBA, but after 10 years in South Florida he was ready to come home.

Goodman returned to Alabama and worked his way up to Senior Sports Reporter for al.com, where he built a large following with his approach to writing that is incredibly informative while reading like it’s written from a discussion with a friend. His large following and passion for Alabama sports blended perfectly together with Joseph’s first published book, We Want ‘Bama: A Season of Hope and the Making of Nick Saban’s “Ultimate Team”.

“When 2020 happened, I really wanted to capture the spirit of that team and what it represented. I thought it was really important. What they accomplished before the season was in a lot of ways more important than what they even accomplished during the season,” Joseph reflects. To tell this story, he would seclude himself in the woods for four-and-a-half weeks with an ever-growing storyboard, a strict writing schedule, and a passion for this Alabama story.

“It was a wild month there,” Goodman reflects on a series of weeks that featured the author turning his phone off entirely except for occasional conversations with his wife Sarah or mentors like his Pulitzer Prize-winning coworker John Archibald. His strict writing schedule had him writing from 1:30 a.m. to 7:30 a.m. before taking a two hour nap, writing again from 9:30am to 9pm then creating an outline for the next writing session before getting some sleep, then starting the process all over again at 1:30 the next day. He already had research from a project he was working on before he had to drop everything to cover the pandemic in 2020, so much of the fact-finding work was already done. However, Goodman still needed to organize the content to tell the perfect tale. At one point there were about 700-something index cards on the storyboard wall to help him do so.

The result is a detailed account of Alabama and our state’s football history written in a way that will entertain even those who’ve never watched one down of Crimson Tide football. “I just really want people to go in with an open mind. One of the book’s central themes is racial justice and just the power of a great team and what that represents. It’s a book for people who are Alabama fans, but so many people have read the book that aren’t even sports fans and it kinda speaks to them in a different way.”

Much like his columns, the book uses sports as a sparking point to discuss larger themes in society. Birmingham plays a prominent role in both the state’s past and events in 2020 that are captured in the book. The state’s history post-reconstruction is told through the lens of college football, an impressive and important feat to put on paper.

“It’s really a love song to the state of Alabama,” Joseph proudly states on his recent publication–and the state has shown him love in return. Book readings and release parties have taken place across the Yellowhammer State, including Joseph’s favorite local spot Thank You Books. In addition to his wife, Goodman says he couldn’t finish without the support of his family, friends, and colleagues like Archibald, Izzy Gould, and John Talty. The book is also written in memory of Joseph’s lifelong best friend and godfather of his son, who forever impacted Goodman’s life.

“So much happened in 2020. It was kinda like our state’s great love of college football, the pandemic, the history of this state, the struggle with racial justice. It all kind of inevitably came together in 2020 and met at this crossroad. That’s where people can start off with the book.” We are living history every day, and we are thankful for people like Joseph who expertly tell modern stories so we can appreciate the world we are making. And we’re extra thankful when they highlight Alabama voices.