The Magic City artist dives deep into her emotions and brings back audio gold. 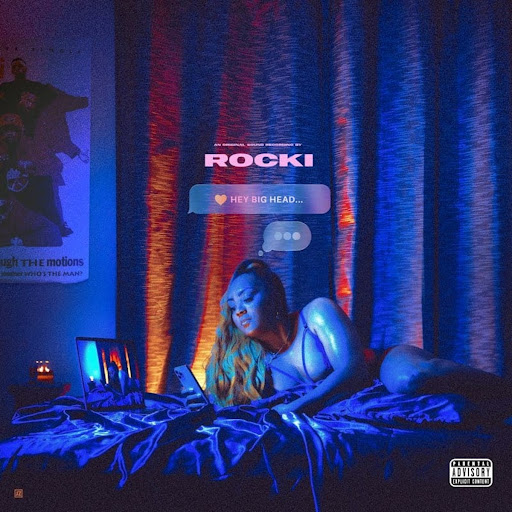 One of Birmingham’s biggest musicians has released another round of catchy tunes for the city to enjoy. Rocki’s release of “Hey Big Head”, a 4-track EP, on November 11 ushered in new Magic City anthems to close out 2021–and things are only growing with a short film accompanying the project releasing soon. While the city is enjoying the sounds and certainly seems grateful for the release, the journey to creating this four-part story first came from the musician looking to heal herself.

Rocki decided to take some time away from music to focus on herself over the last year. During this time, she experienced a brief yet impactful relationship that led the artist on a creative journey to help herself move on from the breakup and be prepared for future blessings. While the relationship only lasted around four months, Rocki “learned a lesson within that short span of time” and was ready to share it with the world.

“It was definitely a need to get it off my chest,” she shared, “if I must be completely transparent I was hurt, because I had invested my time and energy.” The only way to power through this hurt, and not carry it with her to future relationships, was to share her story and allow herself “to feel what I needed to feel, emotions-wise, so that I could get whatever I needed to get up out of me out of me so that I could move forward.”

To accomplish this task, she created four tracks that take the listener through the highs and lows of a relationship. From the “beginning of a situation when you’re learning someone, life is good, everything is peachy” to getting more intimate in various ways before the real emotions eventually come out and “you’re no longer meeting the representative of the person you’re dating. Now you’re able to see that person’s naked self, that person’s true being.” At that point, many hopeful romantics soon discover they are clashing more than they are getting along and often decide to slow things down to a friendship or lesser level. Rocki takes us through the whole love cycle, but makes the transactions a smooth blend while doing so.

The EP starts with “Hey Big Head (You Got It)”, a seamless blend of two songs that provides the perfect introduction to the story. The “You Got It” part of the song was actually recorded a few years back, and has been in Rocki’s “crate” of unreleased tracks, but after hearing the “Hey Big Head” beat and knowing the intro’s theme on uplifting romance Rocki knew it would be the perfect transition. The second track is titled “Facetime”, a timeless topic that many couples can relate to as we continue to move forward with romance in the digital age.

Next comes “Mystique”, which comes with the unique distinction of sampling Rocki’s first radio hit “Belvedere”, another shining example of the musician finding new ways to push the envelope when it comes to creativity. The EP ends with “Memory Feeling”, which expertly ties the album together to be both short and sweet, yet vulnerable and raw. “I didn’t wanna sugarcoat anything,” shares Rocki, discussing how her fans will enjoy the release but ultimately the release of emotions behind the content is what matters most.

Most of the work for the album came out of Rocki’s home, a first for the musician. When quarantine started, Rocki knew she would need an outlet to record since she couldn’t continue visiting studios around town for the time being–so she invested in a home studio. She worked alone for the most part while finding and creating the initial sounds for the album, saying she “dove in and tapped into a new level of myself” as a musician to do so. Fellow Birmingham musician Sam Thomas helped with recording and engineering, with her cousin DLamer Productions contributing a beat as well. Then the skeletal versions of the songs to Brian “B-Flat” Cook in Atlanta with the request that he create new beats that keep the same feel of each song. Synchronicity is a huge focus on the album, even down to little details like every song being 2:22, 3:33, or 4:44 in length.

Just as exciting as the EP is the short film that comes with it. “I just wanted to do something different versus pushing out the norm,” Rocki shares, detailing how the video is much closer to a movie than music video formatting. Fans can expect the film to be released in segments over the next few weeks.

Rocki has come a long way from her first time in a studio with her cousin as an elementary schooler and creating her first song with You Gene Write in ninth grade, sharing how it’s been more than 10 years now after Gabriel Wood and B Flat re-sparked her love for creating and how this length of making music has allowed her to find her sound and style.

“The road hasn’t always been easy, but it’s been dang sure worth it. It’s been a hell of a process but for that reason I’m grateful. Pretty much, I’m looking forward to my future and where it’s going to take me as far as all of my endeavors.” We can’t wait to see what future highlights are in store for this shining star.