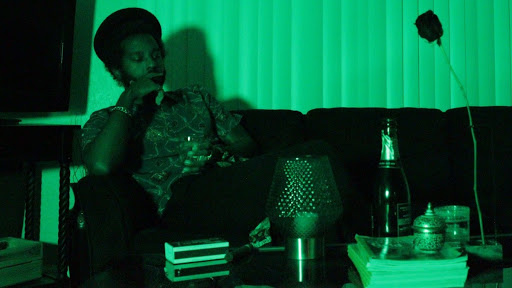 Ego Def, LLC is the creation of Magic City musical mastermind Brandon Varner, better known on stage as Black Plastique. Part of the label’s formation, which occurred in early 2020, was out of necessity. He’d been creating for nearly a decade, going back to when he first started making beats, but most of these audio gems remained away from the public eye (or ear). The label would thrust these private treasures into the public realm at his choosing, while also allowing him to separate business from personal costs.

Previously released work included a 2015 album with Tuscaloosa band Knympho Knife, which he describes as a “mix of Deftones with jazzy stuff and some Queen of the Stones Age thrown in for good measure.” The Black Plastique SoundCloud page also featured Magic City favorites like Inauguration Day (recently remixed with Joyboy) and Brandon had built a solid reputation as a live performer, but it was time to take the next step. Not just for himself, but for a whole city.

“There’s a lot of really talented artists here in this city. As soon as someone gets an opportunity, it’s going to be like a gold rush I feel almost. I just want to have everybody come along with me. You know, I want to have my homies there with me if I got the chance to make it a bigger thing.”

Ego Def allows Birmingham artists to release music in a more comfortable format while being able to explore themselves creatively and learn about what goes into the various aspects of production and promotion. There has also been a clear focus from day one on equal ownership for those involved in the music creation process, which will remain a core value as the label continues to expand.

Brandon believes in the city’s musicians, and the talented people around him make it easy to see why. Birmingham beatslayers and poetics like Linnil, Mel. Crozby, and ethos are in his closest musical circles. Collaborations with Jovani Occomy, Dolo Fibonacci, Tony Leon 555, and more only bolster this feeling of moving as a community. The label provides another path for these unique partnerships to reach new audiences.

The releases have been steadily flowing since October, with the goal being one EP released a month. The releases, much like Brandon’s music career, follow a wide assortment of musical genres, but as the musician says when it comes to inspiration “I’m always going to come back to the same basic wells over and over again. So maybe if you don’t like this project, the next one will be for you.” He respects when artists are consistent with their sound, but likes to diversify his personal sound and keep the audience on their toes.

An ambient album titled “The Blockbuster Drug'' was the first album to be released on Ego Def. The feedback from friends and associates, some who never listened to the genre before, was overwhelmingly positive. Next came a catchy, fun collaboration with Jovani Occomy by the name of theSportingLife, which was mixed by Kevin Wooten. Quickly following came the epic Wasteland album that combined a raw, dark experience with some of the best features on any project we’ve heard in recent memory. The next drop was perhaps the most ambitious to date, as DJ SWAP MEET! transformed the ambient soundscapes of “The Blockbuster Drug” into beats, which Black Plastique then rapped over - appropriately named “The Blockbuster Drug 2”. The next release was the instant classic “Automatic Jazz”, which gives Black Plastique and other rising Birmingham musicians like B.Tru even more evidence to present those doubting the serious talent found in this city. A collaboration with Mel. Crosby by the name of “Toro Bravo” is the latest project, with the recent single “Murder in the Jewlery Store” bringing catchy rhythms over a instantly memorable beat. The group’s EP “Descabello” is due to come out in July.

Brandon’s approach to music is the same as his approach to daily life - uplift others the best you can. Reflecting on what this city means to him, he says “It’s community. It’s super important to look out for each other, and work with each other, and make sure that everybody is getting everything that they deserve.” He lives this belief daily, and we’ve seen it first-hand! The music makes Black Plastique easy to support, but this mindset makes Brandon Varner and Ego Def a pillar in our rising city. Thanks for all you do!