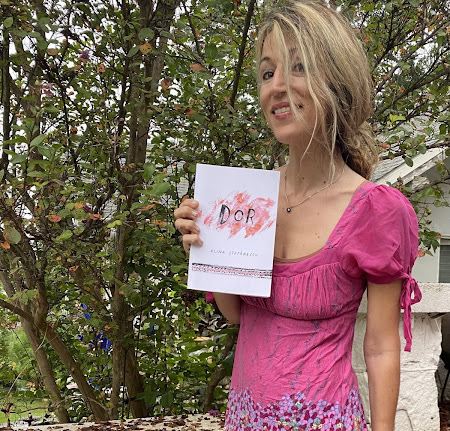 Poetry has been a part of Alina Stefanescu’s life since she was a child. Her parents strongly believed in the power of literature and would incentivize their children to feel likewise by paying them to memorize and recite poems. Both parents were refugees that made a perilous journey to the USA from Romania, and would emphasize that “you can lose everything, but the only thing you won’t lose is the things you’ll memorize”. They would tell stories of Romanian and Russian prisoners who had nothing else to keep them motivated except for the readings that had been kept in their heads and hearts.  “Poetry was like their food. I think it is a kind of soul food,” shares Alina on the power of words, going on to detail how it can create an alternate world in the reader’s mind.

“My mom always used to say that I should be a poet,” Alinda recollects, which inspired the young creative to believe and pursue these goals for herself. After a hiatus of sorts to pursue philosophy and other ventures, Alina first started submitting her work at the age of 35. Her poetry chapbook, Objects in Vases, won the 2016 Award for Poetry Book of the Year from the Alabama State Poetry Society, and every release since has continued to receive equal praise. Her mother passed away unexpectedly around the time of the first book, and every book since has had the shadow of her mom’s impact and belief in her daughter. Her most recent collection of poetry collections, DOR, is yet another testimony to Alina’s brilliant work. It was published this year after winning the 2021 Wandering Aengus Book Award and can be found online and at a variety of local shops including Alina’s favorite, Thank You Books.

The Romanian word “dor” describes a longing feeling, but in a brighter sense. Alina describes it as similar to how the blues makes you feel “happy-sad. It’s hard to describe how the blues will make you smile even though they're sad.” DOR takes the reader on a journey of various moments that navigate this tough-to-describe but widely understood feeling. Many of these stories are inspired by Alina’s growing up in what she calls the “Romanian Republic of Alabama.”

“Everything happened in my parents house in Romanian, we did Romanian things. And then we stepped into this world outside of it that was American. And American was the language I performed in, it was the language we sold ourselves in.” The book reflects on Romanian music and dives into tougher moments like the time Alina traveled back to her birthland to take her mom’s ashes to a destination in Transylvania. Alina views poetry as a way to discuss these complex moments without picking a side but instead exploring them deeper. The illustrator of the book, Ioana Hobai, is also Romanian and perfectly compliments the stories and thoughts Alina shares through words.

While conversing with Alina it is easy to see how much she believes in the power of poetry–and she lives out this belief daily. She’s involved in multiple empowering causes like the Birmingham chapters of 100,000 Poets for Change and PEN America, and works alongside incredible writers like Alabmaa’s newest poet laureate Ashley Jones to bring the Magic City Poetry Festival to the city each year. She will also be teaching affordable virtual poetry classes this fall, which will be announced on her website shortly! The Czech playwright and dissident, Vaclav Havel, who went to jail for his beliefs captures Alina’s passion for the power of sharing our perspectives. His sentiments were that “we write so that we don’t live a lie. It may be the case that nobody ever reads it, nobody ever cares. But you write it because you are alone with yourself in a room, and in that space you can tell the truth. And sometimes that room gets bigger, but you should trust those moments.” Alina goes on to share that a love for the truth is crucial for keeping this space what it is, and we’re thankful she’s stayed focused on her truths as her rooms get bigger.