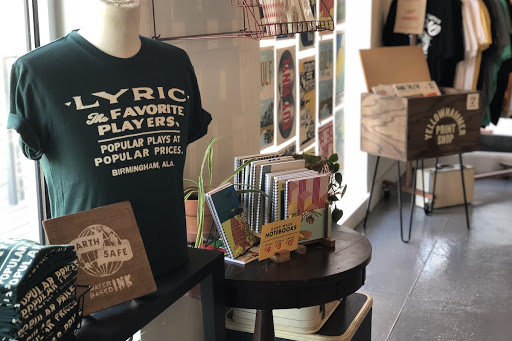 Brett Forsyth and Brandon Watkins have first-hand experience at how the city of Birmingham can give aspiring entrepreneurs the support they need. They recall a list of helpful Magic City moments that helped them get off the ground after forming Yellowhammer Creative in 2009. This includes the famed Bottletree venue’s initiative to let local artists design posters for bands coming to play - allowing the pair to connect and work with touring musicians. Another example is REV Birmingham’s series of pop-ups that allowed Yellowhammer to have a consistent way to interact with customers.

The success built from these moments led to more opportunities which led to more growth. They were soon ready for a brick-and-mortar. A short stint at Continental Gin behind Cahaba Brewery turned into a couple years in an Avondale shop where they began hiring employees to help with the workload. Then came the Pizitz store before they eventually landed on Pepper Place for their retail location while operating out of a spacious Glen Iris office.

When the pandemic happened in early 2020, Brett and Brandon felt they were in a position to uplift some of their friend’s businesses by creating a “Locals” series that would sell limited edition shirts for each company. It was a win-win-win. Yellowhammer and the partner company would each get a new source of income, while Birminghamians “could show support in a small way for the community around them” and stay safe at home. The initial plan was to assist 10 businesses over the space of a couple weeks. Unfortunately, Yellowhammer’s growth over the last decade didn’t shelter them from the devastating impact from the pandemic. A few days after planning this original run, the shop had to close their doors and temporarily lay off everyone except for Brandon and Brett.

Their saving grace was the series they created to benefit their neighbors. They had no idea how successful it would be when they first started the venture, but “Locals” quickly broke Yellowhammer’s online sales records. What was intended to help others, became the company’s main source of income, and kept Brandon and Brett distracted by working nonstop hours like they used to in Brett’s basement.

Their two week plan has now lasted over a year while featuring everything from historic buildings to nonprofits and more niche businesses. Names like Hop City, Wild Honey Flower Truck, T-Bone’s, Faith Skate Supply, the Lyric Theatre, and dozens more flew through the printing presses as the duo raced to complete each week’s limited orders. The first couple of months featured multiple new partnerships every Monday - a lightning-fast creative process that the pair calls both “a graphic designer’s dream / nightmare.”

Yellowhammer was able to use the momentum from this rapidly growing series to drop shirt releases that gave 100% of the proceeds to nonprofits like Be a Blessing Birmingham and the Equal Justice Initiative. They also began working on a “Campaign” series, which “is basically the Local series on steroids.” This involves them working with one local partner each week to create multiple pieces of merchandise. Jones Valley Teaching Farm was a recent “Campaign” collaboration, and the next partnership will be with Birmingham Mountain Radio.

Brett and Brandon planned to end the “Locals” series (which raised over $100,000 for local orgs) in 2020, but they still had a long list of groups to partner with and their own streams of income hadn’t returned to normal. So they kept creating. They are already booked through fall of this year and encourage interested Magic City entities to apply to join the series through their website. They want local entrepreneurs to view them as a fundraising tool and state that they will continue the series “as long as there’s people out there that don’t have a way to sell their own merchandise.”

Things are slowly starting to creep back to familiarity in other areas of Yellowhammer’s business plans. The steady stream of new show announcements has let Brett and Brandon return to the shared love that first inspired their business - designing concert posters. A near-decade long partnership with Alabama Theatre was also recently restored as the pair returned to designing the venue’s annual summer concert series. Their temporarily laid off employees have been back for months now, and the retail doors are back open. The space inside is much like their “Local” series - focused on helping Yellowhammer as well as other local businesses.

The enthusiasm for sharing space and profit with other businesses makes Brett and Brandon stand apart in this writer’s mind, but the two can’t emphasize enough that they are simply returning the blessings that have been given to them. They feel it’s their duty to create a “ripple effect and [give] people that confidence to say you can achieve this and this is just the first step to it. It’s huge for us because that’s how we got started.” Local businesses are the backbone to a thriving, creative local community - and we’re thankful that Birmingham businesses like Yellowhammer Creative put such importance on uplifting those around them.