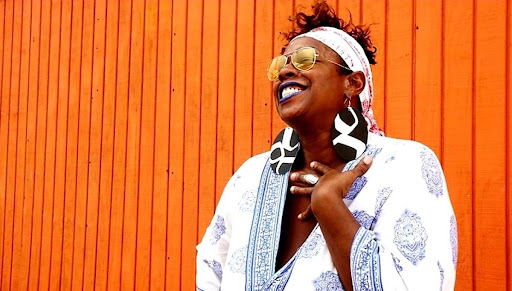 Yogi Dada is found throughout nearly every artistic fabric that makes the Magic City. The creative, known to family and close friends as Yolonda Carter, has had her words heard at open mics throughout Birmingham, her art found in distinguished museums and offices across the city, her earrings brightening the style of multiple residents at any one moment, and her drumming often heard in the winds at East Lake Park. Her first film “GRAFFICA” was voted Best Feature Film in the Black Lens category at last year’s Sidewalk Film Festival, and is being featured in festivals throughout the nation. She’s even found on chocolate bars throughout the city thanks to a fun collaboration with Chocolatå Artisanal Chocolates, will have a partnership “NGUVU” the strength of a woman honoring Black women in history, and a partnership with Naughty But Nice Kettle Corn Co. this February. She also has plans for a new studio, which supporters can help with here.

Her reach is displayed brightly through the vast collection of creative avenues she uses to share her perspective on the world, but she means so much more to the city than the visual and audio wonders she provides. Her spirit, her positivity, and her true desire to uplift the community around her is part of the city’s DNA–something that wouldn’t be possible without people like herself living a more beautiful world into a reality with each new day.

Yogi’s love for art came at an early age. It’s amongst her earliest memories at three and four years old. “My mother really saw a creative gift in me, and she fostered that a lot by exposing me to different aspects of creative things. I remember her making playdough from scratch,” Yogi shares, going on to describe the Lincoln logs, Legos, canvases, colored pencils, and more that were essential backdrops to her upbringing.

Dada was also quick to develop a writer’s heart. “I was literary around four, and wrote my first poem by five years old. I don’t even know how I knew about poetry, but I just wrote a poem,” she joyfully recollects. As Yogi grew older, she gained exposure to performing arts through theater camps, cello recitals, gymnastics, ballet, and more. All of these experiences were planting seeds that would yield beautiful results years later.

Birmingham’s shining creative graduated from college in 1995, but the scholastic experience left a once-inspired artist feeling “pretty fully persuaded I did not have the gift of visual artistry” after a consistent lack of positive feedback during her university years. This experience led her to commit to her written craft more than ever. Yogi attended her first poetry slam in 1996 and was practically pushed on stage by her mother, who’s mantra had always been “Do it afraid.” She won her first slam in a night that forever changed her life. “I never would have met any of the Artists I know today had I not gotten on the mic that night,” she shares while reflecting on the last decade plus of poetic adventures.

Yogi’s mom has a clear impact throughout the artist’s life, and this continued in the years following the poetry slam. Dada recalls coming home dejected from her 9-5 job, and her mom making it her prayer that Yogi would soon be able to live off of her passion. Her mom would sadly pass in 2009, but her prayers (and love poured into her daughter) would see fulfillment the next year when Yogi created and sold her first pair of her now-famous Dada earrings.

Yogi first re-entered the world of visual art after a friend “literally forced a brush in my hand” in 2008. The first set of Dadas came two years later, when she was gifted a pair of wonderful hand-crafted earrings from another friend, but the backs weren’t painted in any way. Yogi decided to paint the other half, and then another pair. Soon people were clamoring to have their hands on a set of one of Birmingham’s most unique jewelry pieces.

There are very few artistic endeavors Yogi hasn’t explored, but the creative didn’t expect to enter the world of filmmaking anytime soon–until a series of beautifully timed moments occurred. Yogi was housesitting for a friend and decided that instead of moving her entire studio to create art in the meantime, she would return to one of the craft’s simplest forms with a black pen and a drawing pad. She started sketching characters and came to love the new style she was developing. “It has a very African look, but it has this graffiti execution,” Yogi explains, going on to describe how her growing up in New York with a mom who was purposeful in putting African images throughout a young Yogi’s life helped shape this new creation. She merged the two influences to identify her style as "GRAFFICA."

Within a day or two of coming up with this concept, Yogi learned of the Dorothy Jamison Day Theater and their ArtWorks program that was looking for Birmingham artists to submit creative project proposals. “I had no intention of doing a film, and I’ve never done a film. I originally submitted a proposal to showcase five large black and white paintings, but it grew from there,” Yogi recollects–but she couldn’t question the stars aligning so perfectly. Yogi’s proposal was accepted, but many new developments were still to come. She dove deeper into the characters, creating names for each character as well as poems, raps, and songs. She collaborated with the African drumming and dance group Sahi On Ko Djony, choreographer Germaul Barnes, and artists Micah and Derrick McKenzie. The film is currently being featured in festivals around the nation, and Yogi has plans to show it again in her hometown in April.

Yogi has also been creating beautiful pieces of art for likeminded businesses. One recent example is her work with Sustainable Georgia Futures, which creates green economy pathways for BIPOC through grassroots efforts. Yogi’s bright interpretation of a mythical African bird flying forward but looking back is the perfect picture translation for “going towards the future but remembering the past.”

The artist has found that the more she unboxes herself and trusts her own artistry, the more successful she has become. “When I was four and five years old, I never thought anything I did was not great. Every stroke was demanded to be on display on the refrigerator. Only until we get into the scholastics of these man-made suppositions of what art is that we start to judge ourselves. I’m learning to trust the natural process of who I am and what I do, and what’s inside of other artists. Utilizing the professional tools of my artistry toolbox over the years to execute that but freedom and being child-like is the engine that drives Yogi Dada.”

She shares that she had a divine conversation with God one day while reflecting on the artistry of Artist Willard Wigan, a Black man from Birmingham, England who specializes in microscopic art, changed how she pursued art. Mr. Wigan can’t read or write, but some of his pieces sell for upwards of a half a million dollars. Not many of us would know his name and he’s doesn’t have the most followers on social media, but he has a 7-10 year waiting list for his work.

“It came to me that that’s what he was created to do,” Yogi shares–and the same can be said for Dada herself. “Surely if I was born with scales, fins, and the capacity to breathe underwater than I was born to swim in the ocean and most of my life the world said get an education so you can go fit into this conformity of dry land.” While education and a more “normal” career are wonderful options for many, Yogi was not finding joy in these arenas. “Everything I wanted, everything I needed, was in the ocean,” and she just had to take a leap of faith.

In the midst of creating and pushing forward, Yogi has always had the same desire to “share, inspire, and uplift humanity” through her individuals works and a focus on collaborative efforts. “I do believe that for me, as an artist, that I have a responsibility beyond making something pretty. Making something that has value, and that comes from inside of me touching inside of those who get to experience my artwork. Thinking bigger.”