From working on number one albums to collaborating with local artists, the Magic City producer keeps pushing forward. 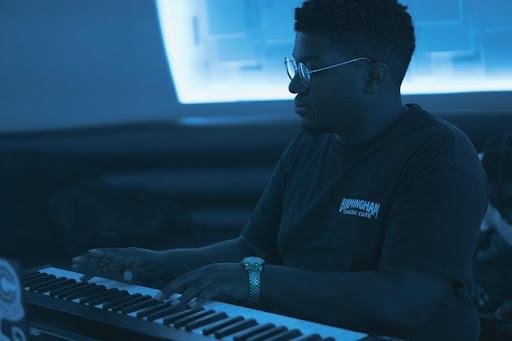 Luke Crowder is reaching new milestones with every new day. The Birmingham producer just co-produced two songs on New Orleans hip-hop veteran Curren$y’s most recent album, Still Stoned on Ocean. The tracks, titled “Angels on the Hood” and “Freezer”, include standout brass instrumentals played by the talented crew at LoudPack Music. “Angels on the Hood” has already become a favorite of basketball legend Lebron James.

The success of this moment isn’t by accident, and it follows a string of ever-building high-profile collaborations with national names like Big KRIT, Baby Tate, Dave East, and produced “I Like” on Young Thug’s YSL label’s #1 album. And these are far from the last songs we will hear from Luke Crowder. The producer is working with Def Jam, Motown, and will have multiple songs with his musicianship featured in the next NBA 2K. Rumor has it Wiz Khalifa may be jumping on an extended version of one of the recent Curren$y tracks. There’s even more exciting meetings and projects being formed beyond that, but time will reveal those jams. Just as important to Crowder are his upcoming plans with Birmingham artists like DionRacii, ChriStyle, and J. Dotta of K.L.U.B. Monsta.

Crowder chose music, but knew he didn’t want to sing. He first played drums before transitioning to piano, which he would take lessons on occasion for. One day his mom brought a keyboard home, and a young Luke was transfixed. One key would play a drum loop, others provided synthesizers, and so on. He liked how it sounded, and wanted to learn more about the process of creating even more beautiful noises from this machine.

A short time later he was introduced to FruityLoops by his friend Quez Williams. As Luke began working on his craft, he’d be inspired after hearing Williams’ beats then go home to try and create something better. This friendly competitiveness soon turned into a serious venture as Crowder, Williams, and Crowder’s brother Kenneth Crowder decided to take their beats around the Magic City and see who’d want to rhyme over them. Birmingham Jay, who was signed to Kottage Boys Entertainment, was the first to do so. The song was put on one of Jay’s first albums and received radio airplay. Luke Crowder was hooked. “It was a bug after that man, I just started working harder and harder for it.”

One of Crowder’s first out-of-state collaborations came from Jackson, Mississippi native and Birmingham favorite Dear Silas, after Crowder heard the artist doing an interview on BYNK Radio. Crowder reached out, and was eventually able to contribute to multiple tracks for the acclaimed The Last Cherry Blossom album. Some time after that, Crowder's father sadly passed away in Mississippi. Crowder had his mind on the Magnolia state, and once again had the opportunity to show Silas tracks. He wasn’t sure if he should take the opportunity with all that was happening but was encouraged to do so by his girlfriend. He showed Dear Silas a song that Crowder had held on to for five years, sharing that he had just had a death in the family and this was a spiritual track for him. Silas loved it, and eventually created a Southern classic with fellow Mississippi musician Big KRIT. The song features Birmingham natives Jeremy Fomby on bass and Wisdom Bibbs on trumpet.

Around the same time, Crowder was studying new routes to get to the next level of collaborations. Rafeal Anthem Brown, a friend of Crowder's and recipient of a Grammy for his work with Nas, put Crowder on to the “sample pack game”, where you simply make the melody for artists or their producers to listen to. They will then build the additional elements of the song as they see fit, saving their team time and introducing new creativity to a project. “They might have the technicality to make beats, but they want a fresher sound,” Crowder said.

The producer notes that his role in music is similar to a point guard in basketball. “I get to assist the slam dunk to somebody else,” he said. And it’s important to him that his team consists of fellow Alabamians. Joining LoudPack (Ralston Fortississimo and Cord Brad) on the recent Curren$y album was Magic City bassist Sydney Battle, who also plays with the worship band at Rock City Church.  Coproducer Walter Weight is also a Birmingham resident.

The team is intentional, highlighting the incredible talent in a city that is often overlooked when it comes to the arts. “I was just glad to be able to showcase other people in the city, especially guys that I consider brothers,” he shared of these recent partnerships. As much as he has his own musical ambitions, he shares the same dream for the entire city. “I want people like Love Moor to be able to be seen on the Grammys,” he shares. And he’s ready to do what he can to “make Birmingham a hub for music.”

““All that talent’s here. It just might be that we don’t know what the next step is to get to the bigger stages,” Crowder said. “But somebody can reach back once they see a little bit of the light, we can all get there.” This passion comes from recognizing a city that made him who he is, and the understanding that he can help others navigate the roads ahead.

Crowder describes his home city as “a place for growing. It’s a place that taught me everything I know.” The city shows you both the easy and hard parts in life, and Crowder has let both shape him. “I think there’s something good in the things that are hard, because they teach you the things you need to hold on to.” For all the trips he makes to extend his influence, he makes two moves back where it all started.

“I don’t plan to leave Birmingham out of my story,” he said.