The Magic City is celebrating 150 years this weekend. 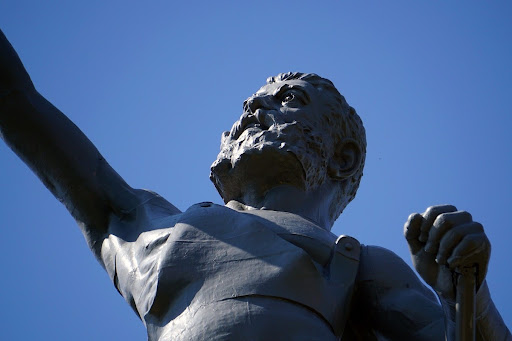 Happy birthday, Birmingham! Our beloved city came into fruition on this day in 1871, meaning we are 150 years old this December 19. The Magic City was born in a period of rapid industrial growth in Alabama, and brought together three neighboring farm towns to form a united name and vision. It brought thousands of big dreamers, hard workers, and newly formed yet flourishing communities to the heart of Alabama.

The Magic City has long been home to some of the nation’s most brilliant minds, gifted athletes, and talented musicians. Angela Davis and Fred Shuttlesworth transformed realities with their impassioned visions–a power that came from living in Birmingham. I’ve been reading an autobiography on the great Frank “Doc” Adams, co-written with The Lost Child radio host Burgin Mathews, and the amount of greatness told of Magic City jazz musicians in the early years of Parker High School (then called Industrial High School) and Sun Ra has been one of the most energizing experiences of my life. But that is how it feels to live in Birmingham, for me at least. You are learning about it daily, even if you’ve called it home since birth.

Right next to my autobiography of Doc are books filled cover to cover with words from some of the finest poets in the world–and they all hail from Birmingham. Names like Ashley Jones, Joi Miner, and Alina Stefanescu are just a few of the perspective-shifting authors of the Magic City that are impacting our country today. An open mic poetry night in Birmingham will provide some of the best vocalized thoughts you’ll hear across the nation on any given night. We are also home to some of the most slept-on musicians today. It truly feels like a bubble of talent that is waiting to burst and shape the future. Magic City producers, R&B singers, dream pop bands, fashion designers, actors, and activists are perfecting their crafts while waiting on the nation to recognize the talent that is in this city. Until then, familiar faces like St. Paul and the Broken Bones and Roy Wood Jr. keep us proudly in the spotlight.

Food has always been a part of our hospitality-filled city, and that legacy is proudly continued today. Business owners like Zebbie Carney of Eugene’s Hot Chicken, Crystal Peterson of Yo Mama’s, Bea Morrissette of Little London and dozens more around the greater Birmingham area are serving up delicious food while providing a place for the community to gather. Our city’s businesses similarly seek to uplift not just themselves, but their fellow Magic City entrepreneurs. Markets and collaborations reign supreme while shopping locally in Birmingham.

Our city’s history is unfortunately incomplete without tales of bigoted mistreatment and cruel acts of punishment towards peaceful protestors. Behind the images of Birmingham police turning water hoses on children are thousands of fearless youth and adults who came together to not only change our racist city–but impact an entire nation. Standing ready behind them were chefs, financers, drivers, verbal supporters, and everyday residents ready to bail them out from immoral cages. The strength shown by these women and men, many of whom are still alive today, should never be understated. It is my personal belief that it is our job as Birminghamians of today to spread the names of these nation changers as far and wide as humanly possible. Gloria Washington Lewis Randall and Ida Owens are two foot soldiers that have impacted my life or those around me in significant ways still today. Sarah Collins Rudolph, the fifth little girl and survivor of the 16th Street Baptist Church, continues to speak up for justice today. These are only three brave women who changed the nation once, and continue to do it on a personal level today. They exemplify the strength that is our city, and there are hundreds right beside them.

This mentality to make the world better through art and activism is still seen in present day Birmingham, as foot soldiers march alongside the youth of 2020 and trumpets and trombones still tell unspoken stories to eager ears across the Magic City. We are still largely often overlooked yet simultaneously overachieving. We are still learning about ourselves, the good and the ugly. And we are still thousands of strangers working to improve our nation, our state, our city, our neighborhood, and ourselves with each new day.

The growth we’ve seen in recent years has driven the excitement of living in the Magic City to a whole new level. Renovated historical theaters and colorful murals provide a visual example of the feeling many Birmingham residents have in their hearts of late. Something special, something big is happening–and it can only occur with the unique set of cultural ingredients and determination that is the Magic City.

I wanted to include thoughts from a few Birmingham residents who’ve inspired me over the years. I encourage you to support them and every other individual using their time to make our city the best it can be!

“Before I moved to Birmingham seven years ago, I frequented the city for its rich arts culture, amazing theatrical and musical shows, and history. Now, living here, I'm privileged to have been allowed to be a part of the culture I once sought out. Birmingham is a classic, yet forward-moving city that's a gem in the state. There's always something new to discover, for all ages.” -- Joi Miner, Birmingham poet

“Birmingham is my home, the place where I came into myself. Here, I learned the history of our nation on the streets where my people marched and fought and died. I learned that we are always surrounded by that history, and that our future depends on acknowledging it, celebrating it, interrogating it, and understanding the ways in which we are still fighting for those freedoms just like Rev. Fred Shuttlesworth, just like Rev. Dr. King, just like John Lewis, just like Claudette Colvin, just like Fannie Lou Hamer, just like all those voices for liberation who cannot ever be silenced, diluted by false remembrance, or forgotten.” -- Ashley Jones, Birmingham poet

“The opening lyrics of the song 'Home' says, when I think of home I think of a place where there's love overflowing. I’ve lived in three other cities and every time I returned to Birmingham for the holidays it was always filled with the love of family and friends. There’s nothing like seeing the Birmingham skyline and knowing your moments from the ones you love. Birmingham means home to me.” -- T. Marie King, Birmingham activist/organizer